Patriot Drills 1.17% Li2O over 33.8 m and 0.85% Li2O over 56.6 m, Extending Mineralization along Trend and Down-dip in First Reported Core Assays from 2022 Drilling at the Corvette Property, Quebec

Vancouver, BC, Canada – Patriot Battery Metals Inc. (the “Company” or “Patriot”) (CSE: PMET) (OTCQB: PMETF) (FSE: R9GA) is pleased to announce the first series of analytical results for drilling completed this winter/spring at the Company’s wholly owned Corvette Property (the “Property”). The Property is located proximal to the regional and all-weather Trans-Taiga Road and powerline infrastructure, within the James Bay Region of Quebec.

Assays are announced herein for drill holes CV22-015, 016, 018, and 019, which were designed to test the northeastern and down-dip extension of the lithium-tantalum mineralized zone at the CV5 Pegmatite. All four holes were collared over lake ice at an orientation of 158°/45°, with end-of-hole depths ranging from 149.9 m to 252.1 m, and each returning strong grades of lithium and tantalum. A summary of lithium (and tantalum) intercepts for the four (4) drill holes (CV22‑15, 016, 018, and 019) are presented in Table 1 and Figure 2, and core photos of mineralized intercepts in Figures 3, 4, and 5. Drill hole locations for holes completed as part of the winter program are in Figure 1.

President, CEO, and Director Blair Way comments, “We are very excited to announce assays for the first series of holes of our twenty-hole winter/spring drill program and look forward to announcing further assay results as they are received from the lab in the coming weeks. These independent assays, confirming lithium and tantalum mineralization within the CV5-1 Corridor, validate the Company’s decision to add a third rig to our summer drill program, which was made after geologists in the field identified spodumene crystals in the pegmatite intercepts as part of initial core logging. After drilling only 5,100 metres, Patriot has established lithium and tantalum mineralization across an approximate 900 m strike length, which remains open at both ends and down-dip. The Patriot team is excited to commence the 15,000 metre summer/fall drill program in June and further delineate this discovery. Additionally, Patriot has identified multiple other spodumene pegmatites across the Property and we look forward to exploring these further, as well as the remainder of the more than 50 km long CV Lithium Trend the Company controls, as part of our summer 2022 program.” 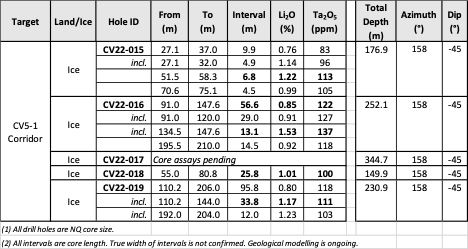 Drill hole CV22-018 was collared 100 m along trend of CV22-015 and returned a mineralized pegmatite intercept of 1.01% Li2O and 100 ppm Ta2O over 25.8 m starting at 55.0 m depth. The intersections in drill holes CV22-015 and 018 confirms that lithium-tantalum mineralization continues within the CV5 Pegmatite body to the northeast under the shallow lake.

As outlined in news release dated April 21st, 2022, geological 3D modeling of the drill holes completed to date indicates that pegmatite continues across the lake from CV5 towards CV1 – a strike length of at least 1,400 m – and that the pegmatite body is widening at depth. The pegmatite body remains open to the southwest, the northeast, and at depth, with a significant portion of the overall corridor of focus – containing the CV6, CV5, CV11, CV2, CV1, CV4, and CV7 pegmatite outcrops – remaining to be drill tested (Figure 1). To date, the main pegmatite body has been traced to a vertical depth of a least 180 m (CV22-030) and additional pegmatite encountered down to a vertical depth of approximately 265 m – ending in spodumene pegmatite, to be further tested in the drill program scheduled to commence in June 2022 (CV22-034).

As reported herein, lithium mineralization has been traced by drilling over at least a 900 m strike length and down dip to at least 155 m vertical depth. To date, drill core sample analytical results have been reported for four (4) drill holes (CV22-015, 016, 018, and 019) with results pending for an additional sixteen (16) drill holes completed over the winter/spring program (4,345 m over 20 drill holes). The Company is using SGS Canada (Lakefield, ON, and Burnaby, BC, facilities) as their primary analytical lab with all samples from the program having arrived at the lab.

The Company is poised to continue its fully funded 2022 drill campaign June 1st, with an additional 15,000 m of NQ coring planned over the summer/fall period. This drilling will focus on continued land-based infill and step-out holes around CV5‑6 and CV1‑2, as well as testing new regional targets (see news release dated March 8th, 2022). The Company has secured a third drill rig for June/July, as well as a barge to allow for continued delineation of the mineralized pegmatite beneath the shallow lake between the CV5 and CV1 pegmatites. The addition of the third rig will also enable increased coring production and drill exploration of spodumene pegmatite elsewhere at the Property.

The Company notes that it has developed a COVID Management Plan for the program and will carry out its field programs while adhering to all federal, provincial, and regional restrictions in place due to the COVID-19 pandemic. Mineral exploration has been recognized as an essential service in Canada and the Province of Quebec.

A Quality Assurance / Quality Control protocol following industry best practices was incorporated into the program and included systematic insertion of quartz blanks and certified reference materials into sample batches, as well as collection of quarter-core duplicates, at a rate of approximately 5%. Additionally, analysis of pulp-split and course-split sample duplicates were completed to assess analytical precision at different stages of the laboratory preparation process, and external (secondary) laboratory pulp-split duplicates were prepared at the primary lab for subsequent check analysis and validation.

All core samples collected were shipped to SGS Canada’s laboratory in Lakefield, ON, for standard sample preparation (code PRP89) which includes drying at 105°C, crush to 75% passing 2 mm, riffle split 250 g, and pulverize 85% passing 75 microns. The pulps were shipped by air to SGS Canada’s laboratory in Burnaby, BC, where the samples were homogenized and subsequently analyzed for multi-element (including Li and Ta) using sodium peroxide fusion with ICP-AES/MS finish (code GE_ICM91A50). 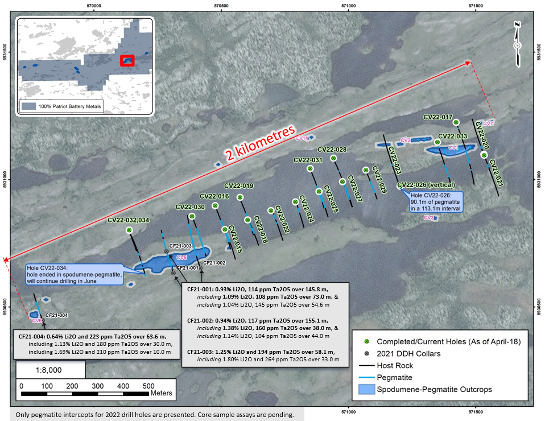 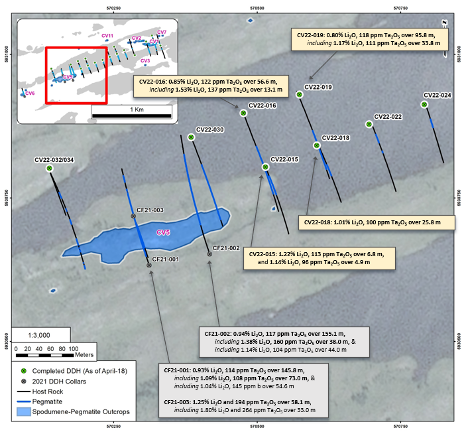 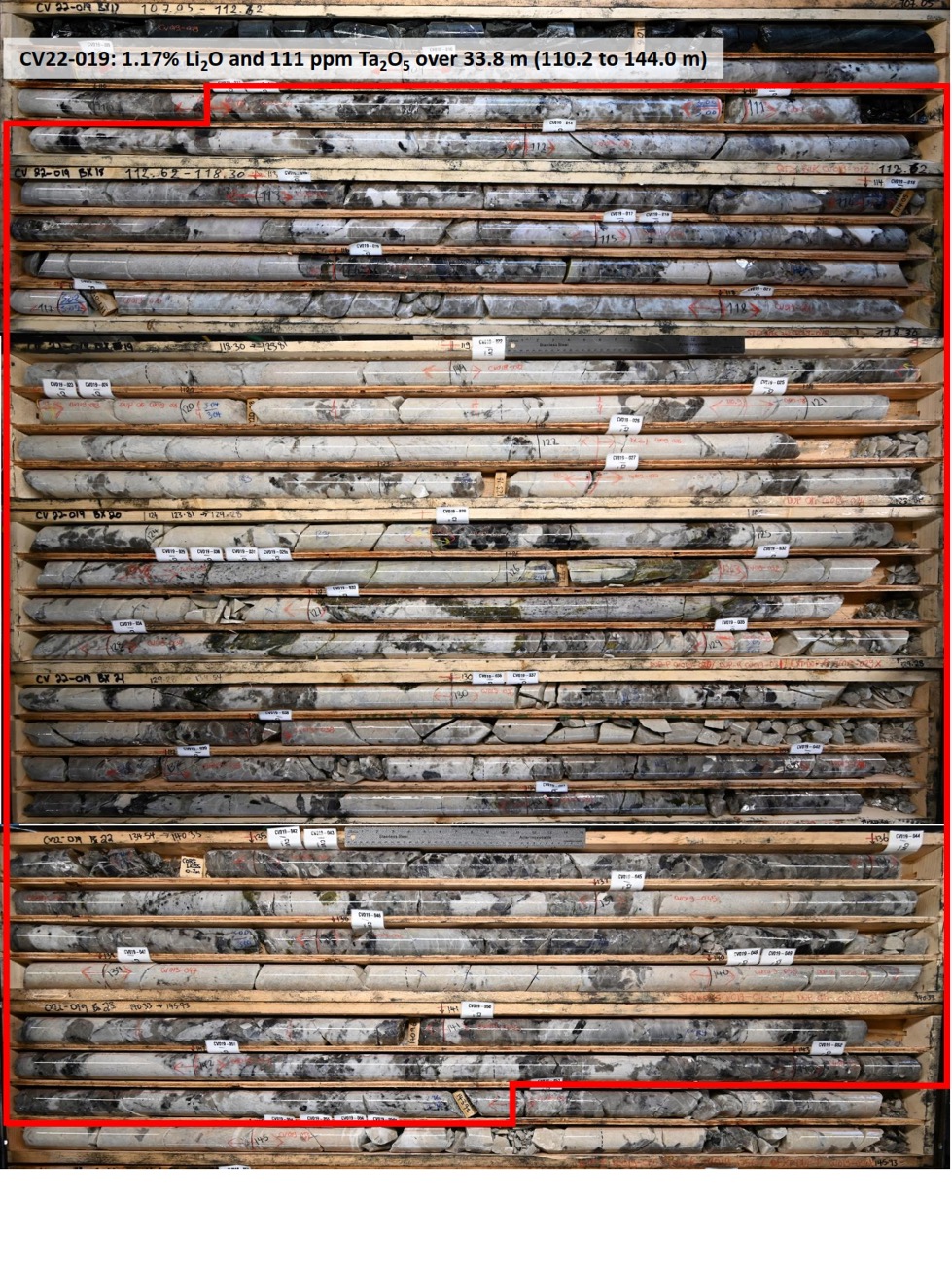 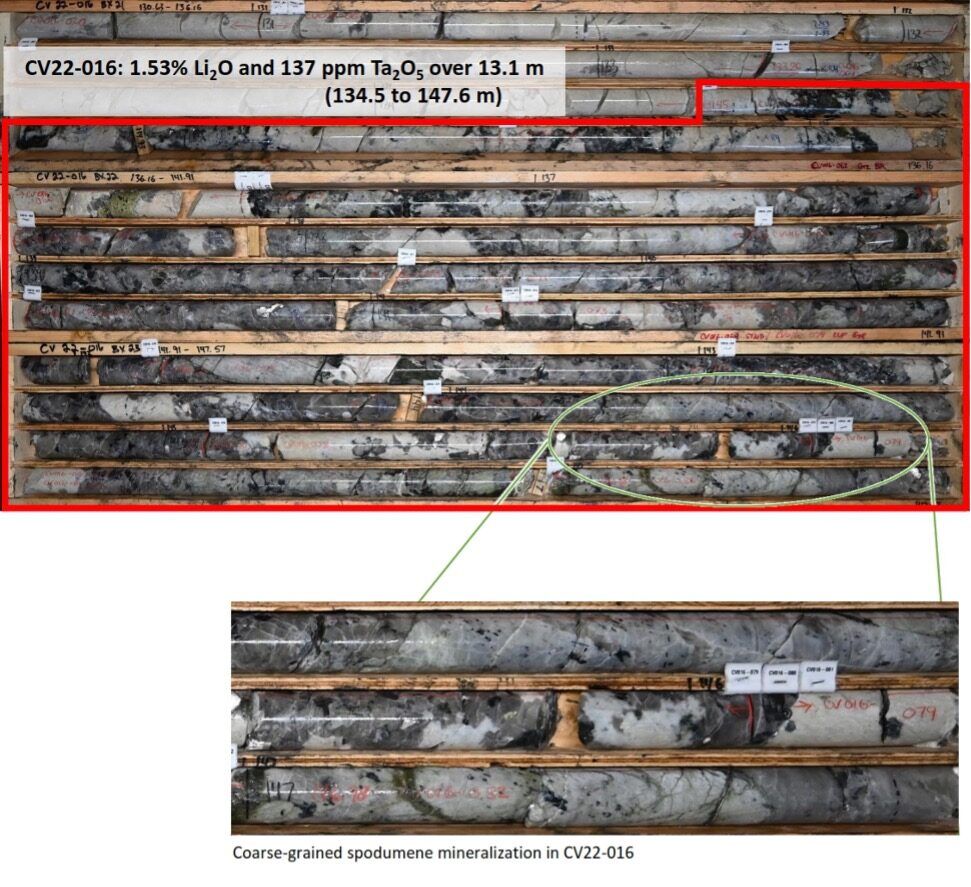 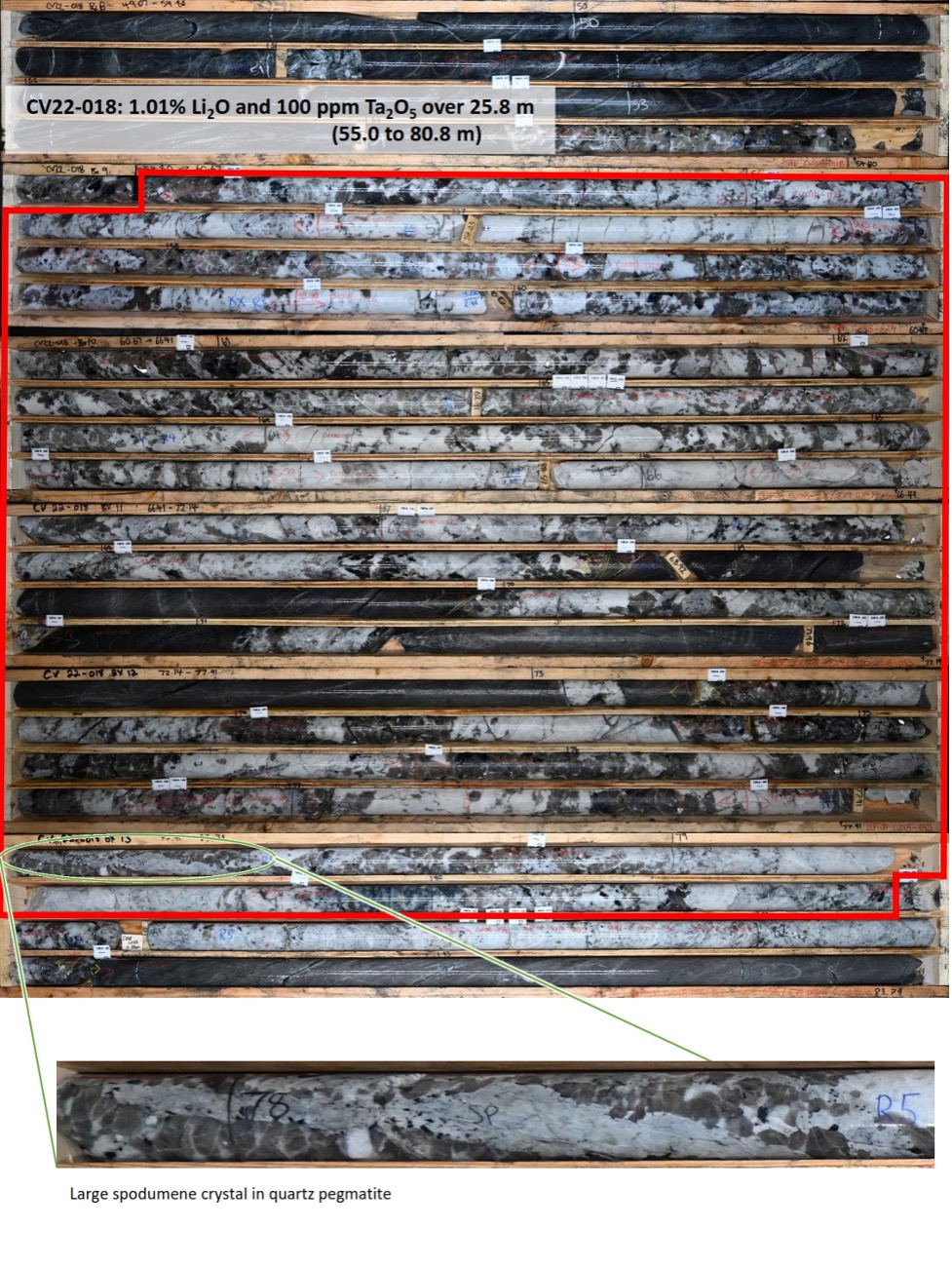 The CV Lithium Trend is an emerging spodumene pegmatite district discovered by the Company in 2017 and spans the FCI West, FCI East, and Corvette claim blocks. The core area includes an approximate 2 km long corridor, which is part of the more than 25-km long and Property-wide CV Lithium Trend. It consists of numerous spodumene pegmatite occurrences, which include the CV1, CV2, CV3, CV5, CV6, and CV7 pegmatites, highlighted by the CV5 Pegmatite – a large (~220 m long and 20-40 m wide), well-mineralized outcrop with drill intercepts of 155.1 m at 0.94% Li2O and 117 ppm Ta2O5 (CF21-002), and 58.1 m at 1.25% Li2O and 194 ppm Ta2O5 (CF21-003). Drilling indicates a pegmatite body approximating 60 m in true width (at CF21-001 and 003), and therefore considerably larger than that observed in outcrop. The high number of well-mineralized pegmatites in this core area of the trend indicate a strong potential for a series of relatively closely spaced/stacked, sub-parallel, and sizable spodumene-bearing pegmatite bodies, with significant lateral and depth extent, to be present.

Darren L. Smith, M.Sc., P. Geo., Vice President of Exploration of the Company, a registered permit holder with the Ordre des Géologues du Québec and Qualified Person as defined by National Instrument 43-101, has reviewed the technical information in this news release.

Vancouver, BC, Canada Patriot Battery Metals Inc. (the “Company” or “Patriot”) (TSX-V: PMET) (OTCQB: PMETF) (FSE: R9GA) is pleased to announce that it has successfully

PrevPreviousPatriot Battery Metals Completes Claim Transfers and Becomes Official Registered Title Holder to 100% Interest in the Corvette Property
NextPatriot Drills 70.1 m of 2.22% Li2O including an interval 40.7 m of 3.01% Li2O in First Drill Hole to Test the CV1 Pegmatite at the East End of the Winter Drilling Corridor at the Corvette Property, QuebecNext