Patriot Battery Metals Inc. (the “Company” or “Patriot”) (TSX-V: PMET) (OTCQB: PMETF) (FSE: R9GA) is pleased to announce core assay results for an additional six (6) drill holes (CV22-037, 038, 039, 042, 043, and 044) completed as part of the summer phase of the 2022 drill campaign at its wholly owned Corvette Property (the “Property”), located in the James Bay Region of Quebec. The target drill area – at the CV Lithium Trend – is located approximately 13.5 km south of the regional and all-weather Trans-Taiga Road and powerline infrastructure.

Ken Brinsden, Non-Executive Chairman and Director, comments: “The scope of lithium mineralization at Corvette is incredible, with further strong intercepts from the summer program continuing to demonstrate the scale and grade of the mineralized envelope. Remaining open to the east, west, and to depth, in addition to the numerous other lithium pegmatite targets on the Property, the Corvette Project remains highly prospective beyond what we have found to date. Corvette is one of the world’s great lithium raw materials discoveries with full credit to the team as we continue to realize its potential.”

Drill holes CV22-038 and 043 were completed as step-outs westwardly from the CV5 Pegmatite outcrop towards the CV6 Pegmatite outcrop (Figure 1). Both drill holes returned strong lithium mineralization over a wide and continuous pegmatite interval, assaying 1.42% Li2O over 59.3 m, including 2.06% Li2O over 7.2 m (CV22-038), and 1.68% Li2O over 22.7 m, including 3.13% Li2O over 7.0 m (CV22-043). A total of four (4) samples assayed greater than 4% Li2O in drill hole CV22-043, to a peak of 5.49% Li2O over 1.0 m. Lithium mineralization is characterized by large spodumene crystals hosted within a typical quartz-feldspar pegmatite with accessory muscovite and is typical of the primary mineralization style observed in drill core from the central and eastern portions of the overall pegmatite body(s) (Figures 4 and 5).

Drill holes CV22-038 and 043 are the westernmost drill holes completed to date from 2022 in which core assays have been received and are situated approximately 1.7 km along strike of the eastern most drill holes with assays received to date, highlighted by CV22‑042 (1.65% Li2O over 159.7 m). The strong lithium grades encountered in CV22‑038 (1.42% Li2O over 59.3 m) and 043 (1.68% Li2O over 22.7 m), coupled with similar mineralogy and textures in distal drill holes located along strike (e.g., CV22-017, 028, 030, 042, and 043), confirm that the high-grade nature of the lithium mineralization is present at significant lateral distance along the principal pegmatite body and collectively emphasize the considerable size of the system. 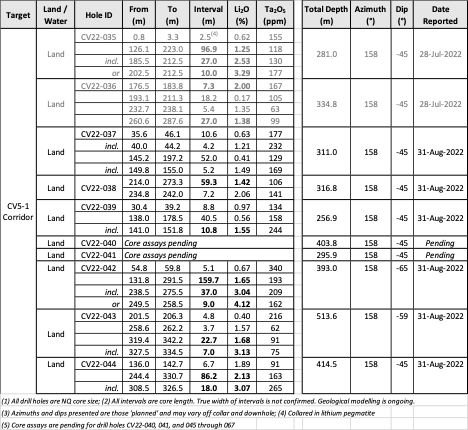 Additionally, the drill data received from CV22-037 and 039 provide a strong indication that the CV1 Pegmatite outcrop represents the surface expression of separate pegmatite body trending sub-parallel and in close proximity to the principal pegmatite body (Figure 1).

The summer phase of the 2022 drill campaign began in early June with two diamond drill rigs operating along the CV5-1 pegmatite corridor. A barge and third drill rig began operating at the site in August and is targeting the mineralized pegmatite(s) from the overlying shallow lake. In early September, one of the drill rigs is planned to move to the recently discovered CV13 pegmatite cluster, located approximately 4.3 km on strike to the southwest of the current drill area, for initial drill testing of that local trend, which extends for more than two (2) km (see news release dated August 10, 2022). 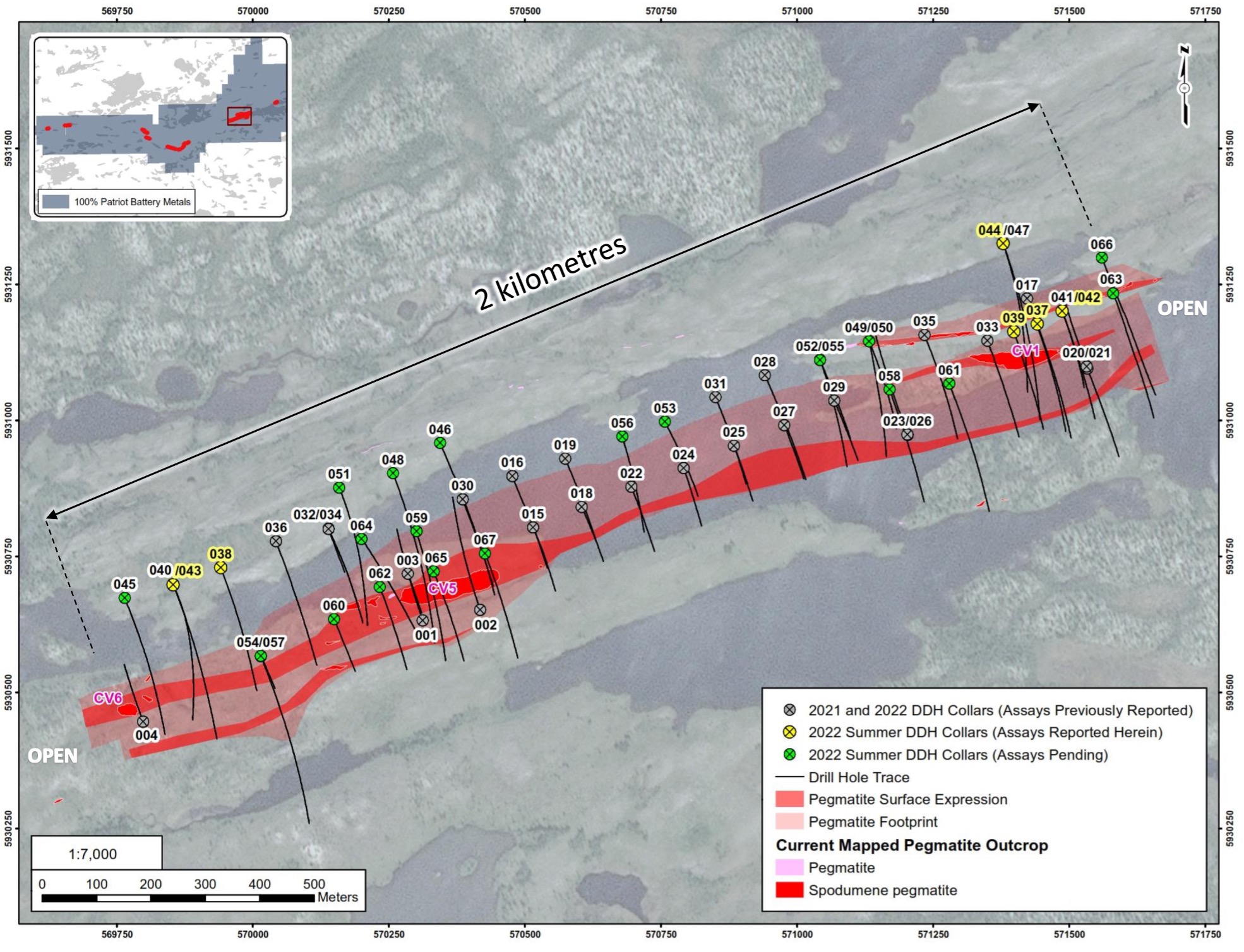 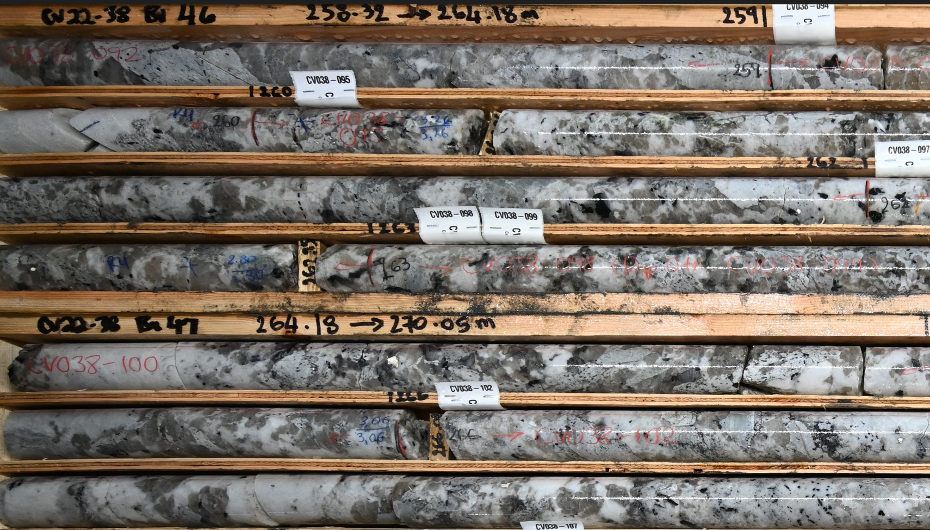 A Quality Assurance / Quality Control protocol following industry best practices was incorporated into the program and included systematic insertion of quartz blanks and certified reference materials into sample batches, as well as collection of quarter-core duplicates, at a rate of approximately 5%. Additionally, analysis of pulp-split and course-split sample duplicates were completed to assess analytical precision at different stages of the laboratory preparation process, and external (secondary) laboratory pulp-split duplicates were prepared at the primary lab for subsequent check analysis and validation.

All core samples collected were shipped to SGS Canada’s laboratory in Lakefield, ON, for standard sample preparation (code PRP89) which includes drying at 105°C, crush to 75% passing 2 mm, riffle split 250 g, and pulverize 85% passing 75 microns. The pulps were shipped by air to SGS Canada’s laboratory in Burnaby, BC, where the samples were homogenized and subsequently analyzed for multi-element (including Li and Ta) using sodium peroxide fusion with ICP-AES/MS finish (code GE_ICM91A50).

Darren L. Smith, M.Sc., P. Geo., Vice President of Exploration of the Company, a registered permit holder with the Ordre des Géologues du Québec, and Qualified Person as defined by National Instrument 43-101, has reviewed the technical information in this news release.

No securities regulatory authority or stock exchange has reviewed nor accepts responsibility for the adequacy or accuracy of the content of this news release.

Patriot Battery Metals Inc. (the “Company” or “Patriot”) (TSX-V: PMET) (ASX: PMT) (OTCQX: PMETF) (FSE: R9GA) announces that the Board of Directors have approved a