Patriot Battery Metals Inc. (the “Company” or “Patriot”) (TSX-V: PMET) (OTCQB: PMETF) (FSE: R9GA) is pleased to provide an update on the 2022 surface exploration program at the Corvette Property (the ‘Property’) highlighted by the discovery of a new and significant lithium pegmatite cluster (CV13) situated less than 4.5 km from, and on geological trend with, the CV5‑1 pegmatite corridor where drilling is currently focused. The new discovery is located central to the Property and approximately 15 km south of the Trans-Taiga all-weather road and powerline infrastructure corridor.

Darren L. Smith, the Company’s Vice President of Exploration, comments: “The Corvette Property continues to impress with an abundance of lithium pegmatite and potential for further discovery as evidenced by the CV13 pegmatites. The CV13 pegmatites are situated directly on trend between the CV5-1 pegmatite corridor being actively drilled and the CV8 pegmatite, which remains to be drill tested. We are very excited to explore this area in further detail given the extent of the mineralization discovered to date, and its proximity to a regional structural flexure creating a very attractive geological setting for lithium pegmatite emplacement. The discovery of CV13 Pegmatite cluster is an excellent example of grassroots exploration and geological targeting bearing fruit through the work ethic of a dedicated and focused exploration team.”

Assay results have been returned for the first series of grab/chip sampling and include a total of thirty-two (32) pegmatite samples collected along the trend grading an average of 0.98% Li2O to maximum of 3.73% Li2O (Table 1). Grades of tantalum average 113 ppm Ta2O5 with a maximum of 948 ppm Ta2O5. Assays from additional grab/chip samples remain pending, as well as assays for a total of 121.1 m of channel sampling completed to provide a more robust estimate of grade potential and zonation across the outcrops.

Table 1: Assays for the ten (10) most mineralized grab samples from the CV13 pegmatites as reported herein 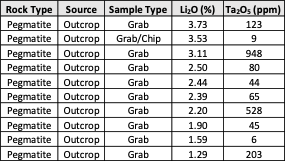 The location of this new lithium pegmatite discovery is very significant and is situated within the central portions of the prospective CV Lithium Trend, which extends across the Property. Specifically, the CV13 pegmatites are situated only ~4.3 km along trend of the CV5-1 lithium pegmatite corridor and ~1.9 km along trend of the CV8 pegmatites. The areas between have very poor outcrop exposure due to glacial till cover and therefore it is possible that additional lithium pegmatite may be present under the shallow cover. Additionally, the CV13 pegmatites are situated within the apex of a regional geological flexure as is evidenced in the regional mapping and magnetic surveys. This local geological setting is a prime area of interest along the CV Lithium Trend as it hosts a highly favourable environment for lithium pegmatite emplacement (along strike and to depth), with a strong potential for dilational zones which may increase widths of mineralization.

Through August 4th, 2022, prospecting and geological mapping has identified at least seventy-one (71) individual spodumene pegmatite outcrops (defined as >5% estimated modal spodumene content) forming up to six (6) distinct clusters across the Property – CV5-1 Pegmatite Corridor (focus of current drilling), CV4, CV8‑12, CV9, CV10, and the newly discovered CV13. Given the proximity of some pegmatite outcrops to each other, as well as the shallow till cover in the area, it is probable that some of the outcrops may reflect a discontinuous surface exposure of a single, larger pegmatite ‘outcrop’ subsurface. Approximately 20 km of prospective CV Lithium Trend/Corridor across the Property remains to be prospected for lithium pegmatite, including the majority of the Felix, Deca-Goose, and Corvette East claim blocks.

The 2022 surface exploration program is being completed concurrently with the 2022 summer/fall drilling phase, which began in early June. Currently, there are three diamond drill rigs operating along the CV5-1 pegmatite corridor. Due to the CV13 Pegmatite discovery, the surface program has been extended until mid-October / first snowfall, and will continue with mapping, channel sampling, and prospecting across the Property. Additionally, the Company is actively permitting drill holes for initial drill testing along the CV13 pegmatite trend. 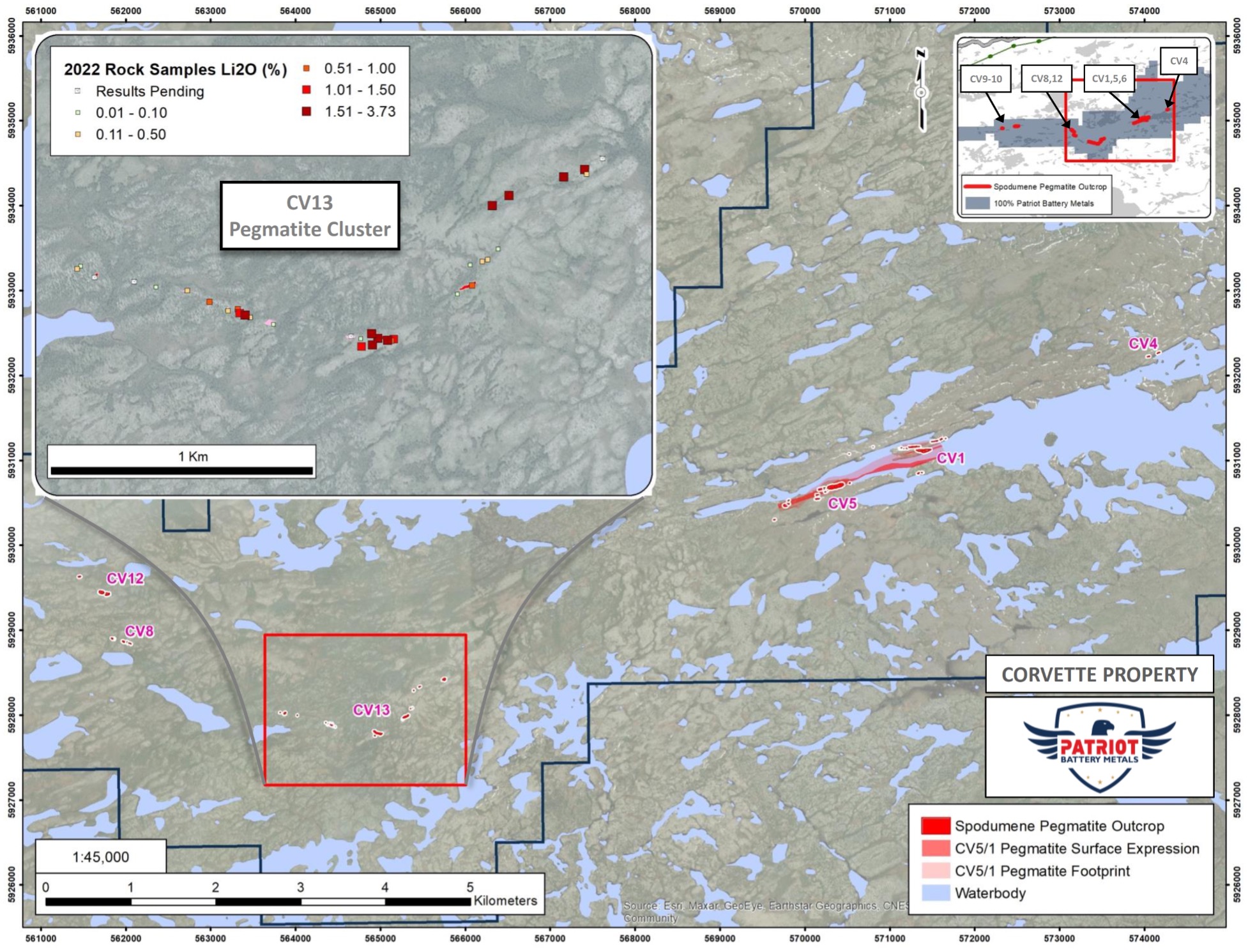 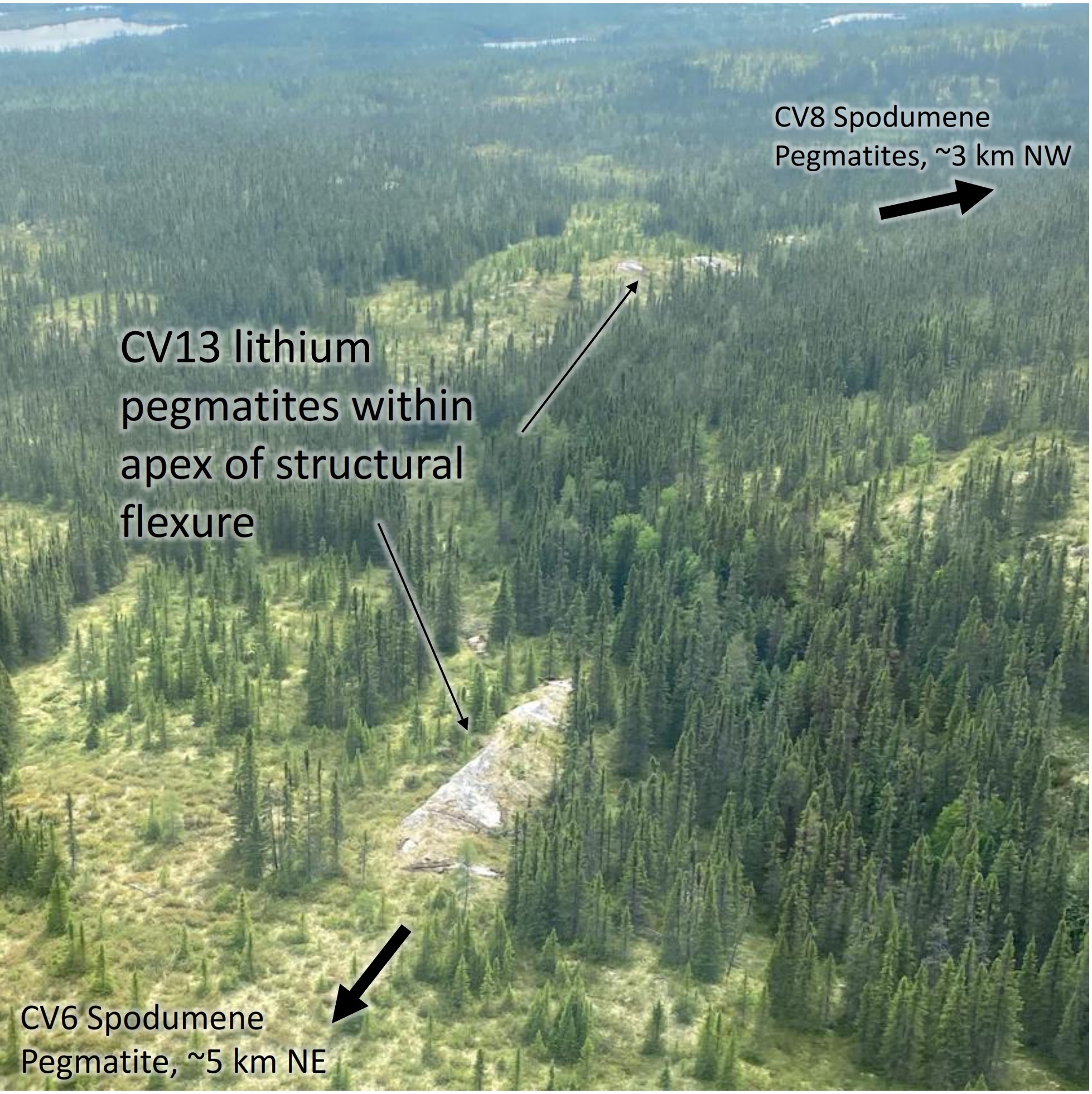 Figure 2: Two of the larger lithium pegmatite outcrops in the CV13 cluster, located at the apex of a regional structural flexure 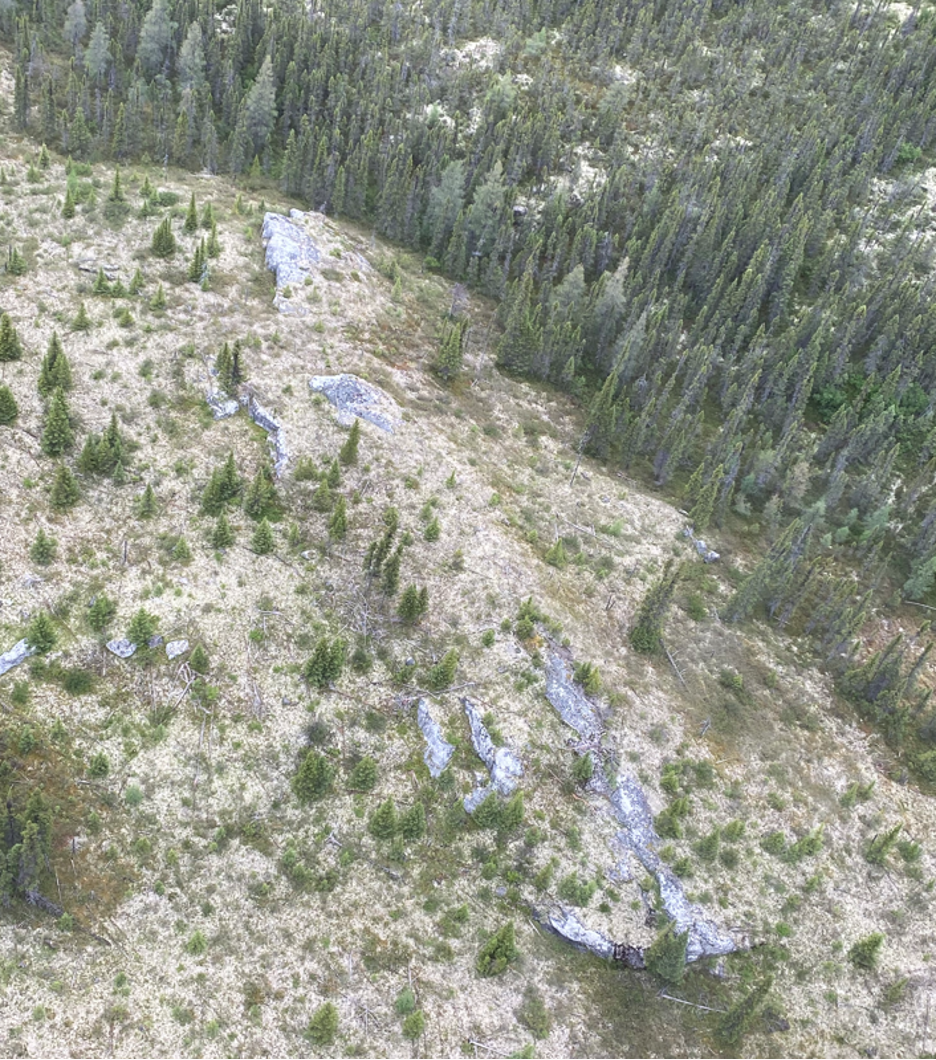 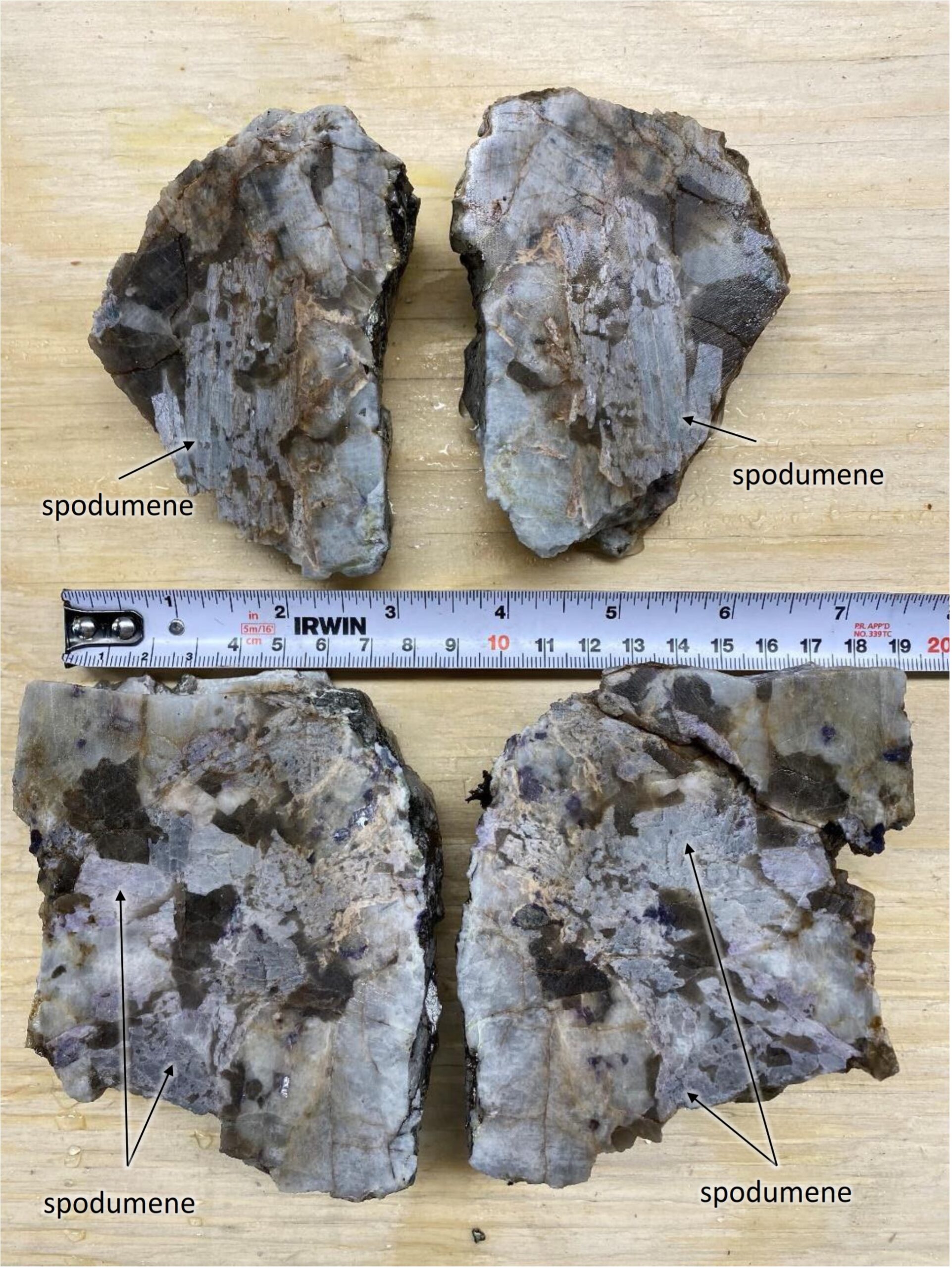 All rock samples collected were shipped to SGS Canada’s laboratory in Lakefield, ON, for standard sample preparation (code PRP89) which includes drying at 105°C, crush to 75% passing 2 mm, riffle split 250 g, and pulverize 85% passing 75 microns. The pulps were shipped by air to SGS Canada’s laboratory in Burnaby, BC, where the samples were homogenized and subsequently analyzed for multi-element (including Li and Ta) using sodium peroxide fusion with ICP-AES/MS finish (code GE_ICM91A50). The Company has relied on the internal lab QAQC for the surface sample analysis.

Management cautions that prospecting surface rock samples and associated assays, as discussed herein, are selective by nature and represent a point location, and therefore may not necessarily be fully representative of the mineralized horizon sampled.

The CV Lithium Trend is an emerging spodumene pegmatite district discovered by the Company in 2017 and spans more than 25-km across the Corvette Property. The core area includes an approximate 2 km long corridor hosting numerous spodumene pegmatites, highlighted by the large CV1 and CV5 pegmatite outcrops, and has returned drill intercepts of 1.22% Li2O and 138 ppm Ta2O5 over 152.8 m (CV22-030), 1.45% Li2O and 177 ppm Ta2O5 over 84.0 m (CV22-028), and 2.22% Li2O and 147 ppm Ta2O5 over 70.1 m, including 3.01% Li2O and 160 ppm Ta2O5 over 40.7 m (CV22-017). Drilling to date indicates a principal spodumene-bearing pegmatite body of significant size and has been traced by drilling over a distance of at least 1.9 km, and therefore, is considerably larger than that observed in outcrop. The high number of well-mineralized pegmatites in this core area of the trend indicate a strong potential for a series of relatively closely spaced/stacked, sub-parallel, and sizable spodumene-bearing pegmatite bodies, with significant lateral and depth extent, to be present.

Darren L. Smith, M.Sc., P. Geo., Vice President of Exploration of the Company, a registered permit holder with the Ordre des Géologues du Québec, and Qualified Person as defined by National Instrument 43-101, has reviewed the technical information in this news release.

No securities regulatory authority or stock exchange has reviewed nor accepts responsibility for the adequacy or accuracy of the content of this news release.

Patriot Battery Metals Inc. (the “Company” or “Patriot”) (TSX-V: PMET) (ASX: PMT) (OTCQX: PMETF) (FSE: R9GA) announces that the Board of Directors have approved a